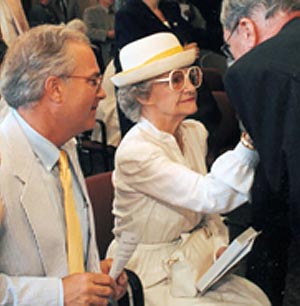 A Life of Compassion

Described by her friends as deeply caring and compassionate, Maybelle Clark Macdonald was born in the Samaritan Hospital in Portland, Oregon on March 27, 1916. A woman of great faith, she devoted her life to helping others before passing away peacefully on December 10, 2009.

“Middy,” as Maybelle was known to her friends, grew up in the midst of the abundant success of her entrepreneurial and philanthropic family and was a loving mother with 11 grandchildren and 17 great grandchildren. Her grandfather, Orange M. Clark, moved to Oregon from Michigan in 1902 where he and his son, Maybelle’s father, Wilson Clark, owned and operated the Clark & Wilson Lumber Company in Linnton, Oregon.

Maybelle’s family moved to Northwest Portland in 1925 and lived at a residence on the corner of Lovejoy and Cornell Road. She attended Ainsworth Elementary (where she often walked up the steep, 1.7 mile-long hill to the school) and Catlin Gabel High School. After attending Mills College, she later graduated from the famed Cordon Bleu Culinary Institute in Paris.

Maybelle was known for her great sense of style and her eye for color and design. Someone noted once that she could “wear hats anywhere from Paris to Gearhart and get away with it.” Sophisticated with a keen interest in the fine and performing arts, Maybelle was very active in the cultural community—but her most outstanding attribute was her deep compassion.

A Heart for Others

Philanthropy became important to Maybelle at a young age. When she was nine, her father began taking her to meet and assist the families living in Oregon’s logging camps, taking pains “to teach Middy the value of money and how to spend it.”

Throughout Maybelle’s life, she was an example of giving. She founded Meals on Heels which later became Loaves & Fishes’ Meals on Wheels program. She was a founder and member of the Albertina Kerr Guild, and founded the Maybelle Clark Macdonald Center and Residence. With a passion for helping women and children in crisis, Maybelle always gave freely of her time, energy, and leadership, in addition to generous financial support.

Inspired by the leadership of others, she created the Maybelle Clark Macdonald Fund in 1970. Now among Oregon’s largest foundations, the Fund continues to support the good works of Oregonians in Maybelle’s honor. Always kind and gentle, Maybelle supported and attended to the needs of the poor, homeless, and disenfranchised with grace, humility, passion, and wisdom with her own wonderfully endearing style. While she is deeply missed, her legacy lives on.